Q. I thought we already had fire ants here? 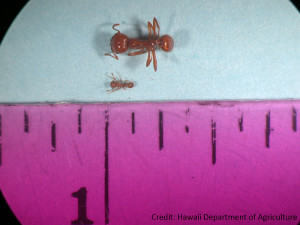 A. There are many different ants called fire ants. The little fire ant is relatively new to Hawaii. The tropical fire ant, likely the one you are thinking of, has been in Hawaii for over a hundred years. The tropical fire ant, Solenopsis geminata, was first documented in Hawaii in the 1880s and is widely established. They build slight mounds or live in holes in the ground. Their preferred habitat is sunny, dry areas, such as beach parks and roadsides. Colonies compete for resources, keeping the density relatively low. They are easy to control with off-the-shelf granular ant baits. The red imported fire ant, Solenopsis invicta, notorious for invading southern states on the mainland U.S., has not been detected in Hawaii, but has been intercepted in shipments destined for the islands.

The little fire ant (LFA) is a new ant in Hawaiʻi, first detected in Puna in 1999. LFA, or Wasmannia auropunctata, is only about as long as a penny is thick. They are a rainforest species that live in trees as well as on the ground. Colonies work together and form a network of supercolonies living in trees and on the ground, raining down on unsuspecting people and animals. In Hawaiʻi, an infestation of little fire ants is harmful to people and pets, and catastrophic for agriculture and the environment.

Q. Why should I collect and submit ants from my property? I know I don’t have LFA.

A. We are asking all residents to submit ants from their yard or property every year for the following reasons:

Q. How can I tell if I have little fire ants? A. Test your yard or home (use our method for attracting and collecting ants to submit for ID). Most often people are stung by little fire ants before they realize they have the invader in their yard, garden, or home, but it will be easier to get rid of them if they are found earlier. Stings most often occur on the person’s neck or torso when the ants rain down on them from above. Many people that aren’t familiar with LFA do not even realize that tiny ants have stung them–some initially think it is an allergic reaction to detergent or heat rash.  Other indications are seeing small ants that are uniformly orange or red. When in doubt, collect a sample. Regularly quarantine and test any mulch or potted plants you may be bringing to your home.

Q. How do I get rid of little fire ants? 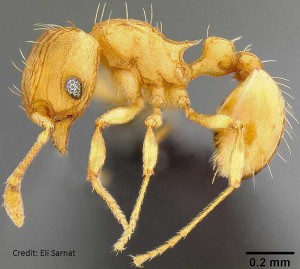 A. Make sure it is LFA, because the methods for controlling or eradicating LFA are different than for any other ant species. Most areas in the state are free of little fire ants and a new infestation should be immediately reported to your local invasive species committee or the Hawaiʻi Department of Agriculture.  In locations where island- or regional eradication is possible, officials will either help control or eradicate, or will provide training resources to achieve that goal.

If you live in East Hawaiʻi or other areas on Hawaii Island where LFA have become established, the Hawaii Ant Lab (HAL) holds regular workshops for homeowners on controlling little fire ants and their website is filled with resources for Hawaiʻi Island residents struggling to deal with little fire ants.

Q: Do little fire ants cause blindness in pets?

A: There is a definite link between areas where pets are experiencing blindness and the presence of little fire ants, though no studies have been done to determine causality. We have seen consistent evidence of pets and livestock in infested areas being stung repeatedly over time, with visible wounds on exposed areas with little or no fur, resulting in infection.

Q. What about using fungus to control little fire ants? 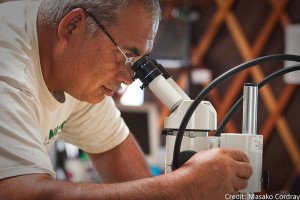 A. Most invasive species are not considered invasive in their home range because they have evolved alongside other insects, diseases, or other factors that “keep them in check.” The practice of classical biological control is based on introducing the predators or diseases of a pest from that pest’s home range in hopes of reducing its invasiveness.

There is currently some research into biological controls for little fire ants. Dr David Oi, originally from Hawaiʻi, is based at the USDA Agricultural Research Service in Gainesville Florida. He’s working with Dr Peter Follett of USDA in Hilo and Juan Briano of the USDA South American Biological Control Laboratory surveying LFA natural range with the hope of finding new pests or diseases with the potential to control this species. So far, no potential biocontrol candidates have been identified.

To date, using pesticides, including insect growth regulators and baits containing spinosad (a metabolite of naturally occurring soil bacteria), is the only known effective way to eradicate small populations of the little fire ant and prevent it from becoming a large population. Eradicating Wasmannia auropunctata from Maui, Hawaiʻi: The Use of Combination Treatments to Control an Arboreal Invasive Ant

Q. Are there “less toxic” or “organic” alternatives to the pesticides currently in use?

First of all, a word of caution on “organic” and “home remedies.” Just because something is considered “organic” or not artificially made, does not mean it is safe to use, or does not harm the environment. Be careful with anything you use to kill bugs, no matter if it is organic or not. Please treat them all as the dangerous chemicals they are.

For example, boric acid, a natural occurring compound, is often regarded as a natural pest control product which can be used in some circumstances in organic agriculture (check with your certifying agency first). However, just because boric acid is a natural substance, does not mean it is completely safe. It is harmful to children, adults, and especially dogs, so contact should be avoided. Also, too much boric acid in the soil can be toxic to plants.

There is currently no organic bait option that is effective on LFA. The Hawaiʻi Ant Lab is working to develop a formulation, and if found to be effective, will work to get it approved for use.